This blog post will be written as it happens so bear with it. 🙂 So we were up and showered by 4am and we simply could not be bothered for breakfast and so we just loaded the bikes up and started the short 3 mile cycle to the first train station. This was actually quite tough as we had a head on wind and with only about 2 hours in bed we were tired before we even left.

Oh yeah and not to mention we have nearly 20kgs of equipment on the back of each bike. We get to Bognor station and get on the train, nothing really exciting till be do a change at Barnham where some random lady pretty much threw her bike against mine and I was squirming about sustaining damage before we get out of Sussex.

It was a long train ride to London and when we got in to Victoria we then had to cycle across London to Kings Cross which was quite interesting and the drivers are pretty scary. Jane got cut up by a truck and was forced to stop. We went quite a scenic route round London as the sat nav was a little unsettled to say the least.

We get to kings cross and load the bikes on the train and now Jane is catching flies while I start writing the blog post…. She will go mad when she see’s this photo. 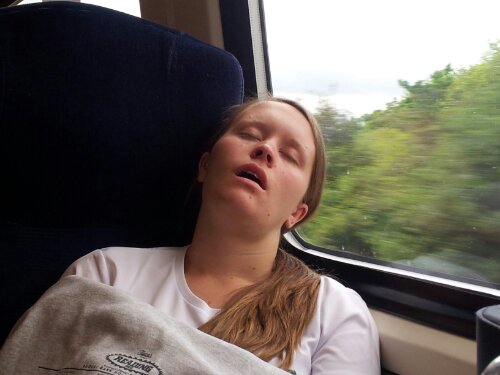 So thats it so far…. We are heading to Edinburgh then we have a few more changes and I will update as we go along today. Hopefully I wont bore you too much.

Well we got to Edinburgh on time and we headed to the back of the train to collect our bikes. Nobody was there except the cleaner who told us to weight in the end carriage for a guard to come along to open the bike store up. After five minutes the carriage doors shut and locked and we started to get worried when the announcement said that it was going back to London. Jane legged it down the carriages to find someone and after a few frantic minutes we were let out and we collected our bikes.

I am writing this stood outside Boots at Edinburgh train station. So we have just got off the train from Edinburgh to Inverness and on this train we had our bikes racked up next to us and yes me being a geek took a photo. So that’s the bikes nice and safe. I have already twisted my knee and I think this is due to having to move the heavy bike round the stations so I need to watch that. On that train I also fancied a cup of tea and so I had to spend a fortune on a lukewarm cup of tea but we did get our first Scottish change. It still doesnt look real to me so who knows how many fakes we will handle without realising.

So the train we are on at the moment is going from Inverness to Thurso and we should arrive by about 22:00. Fingers crossed!!! We have know idea whether or not we can get food at our hotel so we went to Pizza Hut and got 4 pizzas which tasted fantastic. 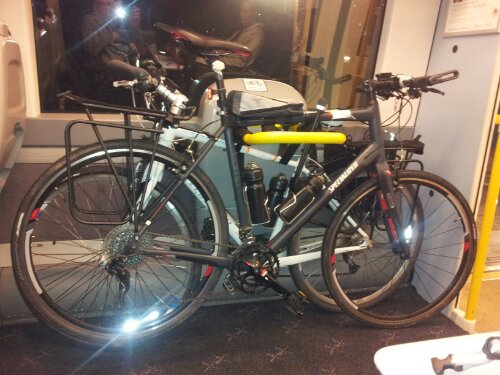 We made it to John O’groats. We arrived about 22:30 and just managed to squeeze a beer in which was nice however we are exhausted so heading off to bed.